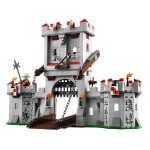 Lego Kingdoms King’s Castle is a 933 Lego piece set which enables you to build a castle that is so full of realistic and intricate detail, it will simply take your breath away.

Instead of just a castle building, you’ll find that there is a bit of a situation here where the castle needs to be defended and kept safe from attack from enemies of the King.   Therefore, the accessories you get with this Lego set will enable your children (and you too) to play out scenes where the castle is getting attacked and where you will have to defend it and the King from harm.

Hours of Playtime With The King’s Castle

Once built, the scope for imaginative and creative play is limitless.  With so many realistic touches (such as a rat in the dungeons) and moving parts, such as the drawbridge, the gate that cranks up and down and the catapults that actually shoot stuff – your kids can act out different scenarios for the attack and defense of this castle.

In all, customers who bought the Kingdoms King’s castle believe this to be a top-quality Lego set and were blown away by it.

This is just a small sample of the high-quality and awe-inspiring Lego sets available today. It is no surprise that so many of these are quickly being snapped up as collector’s items.

Posts from the same category:

How Babies Learn To Walk How Play Gyms Stimulate Your Baby The 4 Stages of A Baby's Development How Safe Are Your Kids' Toys? How To Clean Your Baby's Toys Gifts For A Newborn Wooden Toys